I first saw Albus’ photo in the newsletter asking for donations for the medical fund, which I immediately made. I couldn’t get over the pitiful photo or the possibility that he could lose both legs. I assumed he was in care at Pasadena Humane, so I emailed Izzy that I was willing to foster him and administer meds. A few days later, Izzy asked if I were still interested in taking Albus in; apparently the foster he had been with wasn’t prepared to handle his medical needs. I went and picked him up the same day. When I saw him in the pet carrier, he was so small and frail that I didn’t even know if he would survive. I took him out of the carrier when we arrived home, and he clung to me, purring with the loudest purr I’ve ever heard. I knew at that moment I wasn’t going to let him go, no matter what challenges he faced. I let Izzy know that I would be adopting him once he was eligible, and changed his name to Chunnilal that same day.

Chunni turned out to be a fighter; he survived the abscesses, infection, sinus problems, and malnutrition to become a happy and healthy little guy. Due to the bone damage from the infection, his right front leg had no joint, and it couldn’t bear any weight; the muscles tightened as he grew, so that he progressed from a slight limp to a frozen limb. To avoid pain and arthritis, the leg was amputated, something that affected me more than it did him. He recovered quickly and was cleared for adoption within a few weeks of his surgery. Chunni is fearless in exploring his new home. He runs and jumps, teases my elderly cat Chaavi, stalks my dog Chori, and climbs up my back when I sit on the couch. When he wears himself out, he curls up next to me or in my lap, and he still has the loudest purr I’ve ever heard. When I offered to foster him, I started out to do a good deed, but I ended up loving Chunni so much, and I’m grateful for everything the foster staff and the vets at Pasadena Humane have done for him–and by extension, me. 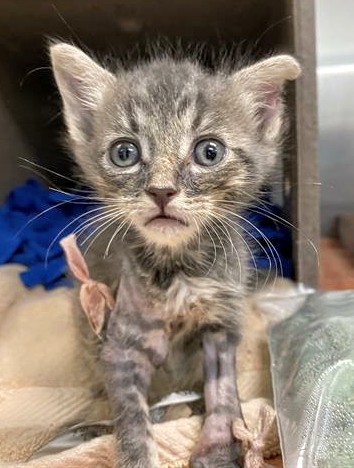