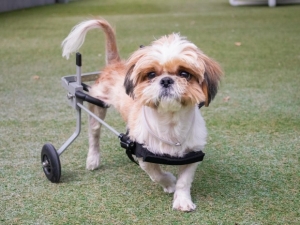 One thing I love about Pasadena is that it is a giving community. I’ve heard Pasadena has more non-profits per capita than any other city in the country. While I haven’t verified this as fact, I believe it. We have an amazing number of charitable organizations supporting many worthy causes, including organizations serving vulnerable people and animals in our community.

At Pasadena Humane, we provide lifesaving care for even the most at-risk animals. During this week of gratitude and giving, I wanted to share with you the story of one special dog that I remember fondly, a three-year-old Shih Tzu named Chad.

On a very hot September day, one of our animal control officers was dispatched to the scene of a hit-and-run accident. A small, tan and white dog had been hit by a car in the middle of a residential neighborhood. The dog was completely disoriented and unable to stand. He was rushed back to the shelter for immediate assessment by our medical team. A vet exam revealed that he had suffered a traumatic injury that caused damage to his spine. He was unable to use his hind legs, dragging them as he tried to walk on his two front legs.

Chad, as he was soon named by staff, was in dire shape. Fleas crawled through his matted, dirty fur. And, it was challenging to help him because he was terrified of humans. Pain and fear caused him to lash out, growling and barking whenever anyone approached his kennel.

Despite all the odds stacked against him, our team believed there was still hope for Chad. He began showing signs of improvement over the next few days. While he was still unable to use his back legs, he seemed to be in less pain, and he started to eat on his own.

Chad was slowly getting used to human touch and was ready for grooming. As the team shaved off his dirty, matted fur, they found irritated skin caused by the painful mats and flea allergies. He was started on treatment for these conditions and soon began to feel much better.

Our behavior team began to work with Chad once he was medically cleared. They had two main goals: to help him learn to trust people and to teach him how to use a doggy wheelchair.

With a fresh new haircut and the attentive, loving care provided by our staff, Chad took to the wheelchair at once, speeding down the hallway of our shelter clinic like an Olympic sprinter. Chad’s transformation was remarkable. The once terrified boy now greeted new people with a tail wag before leaning in for petting. While he may never regain the use of his back legs, Chad is now living a happy life as a beloved pet.

This coming Tuesday, November 30, is GivingTuesday, a global day of generosity dedicated to unleashing the power of people and organizations to transform their communities and the world. If you are able, I encourage you to take part by supporting your favorite charity on this special day.

Dia DuVernet is the president and CEO of Pasadena Humane.