Six-year-old Sebastian is a smart and energetic dog. He loves playing with toys and spirited games of fetch. Afterwards, he’ll trade his toy for a delicious treat!

Have you ever wondered why your Spot’s ears perk up when it’s perfectly quiet? Or why Fido barks a minute before the delivery person appears with a package at your front door? Well, it’s quite simple. In addition to some dogs being able to smell people or objects as far as 12-miles away, dogs have much more sensitive hearing than humans.

Although my dog Sueshi sometimes acts like she doesn’t hear me at all when I am giving her a command, in fact dogs can hear sounds four times farther away than we can. Dogs can hear higher frequencies, can differentiate sounds (such as the sound of your car versus other cars), and are good at pinpointing the exact location of sounds.

With such superior hearing, you can imagine it might be hard for dogs to tune out distracting noises.

Perhaps that’s why studies show that music, particularly classical music, helps reduce stress levels in shelter dogs as measured by their heart rate and observable behaviors. Dogs who listened to classical music were more likely to lay with their heads down in their kennels compared to other dogs who were more likely to vocalize, pant and put their legs up on the kennel door.

While on the surface this may seem like just an interesting finding, I assure you it has more significant implications. Not only is a reduction in stress beneficial for shelter dogs’ mental and physical well-being, but it also translates directly into how quickly pets are adopted from a shelter. Dogs who appear calm and quiet find homes more quickly. Plus, a calm kennel environment is less stressful for all the animals and more welcoming for prospective adopters.

At Pasadena Humane, we take these findings seriously. To help reduce stress and anxiety, the dogs at the shelter enjoy twice-daily music therapy: “Symphony Hour” in the morning and “Lullaby Musical Hour” in the evening. During this time, classical music is piped through speakers in the kennels helping the dogs relax. Nine-year-old Daenerys has a calm and relaxed vibe, but loves to go for walks and enjoys a toy when she’s in play mode. She’s extremely affectionate and loves back rubs.

And while many dogs prefer classical music, that’s not always the case, as discovered by our friends at the Scottish SPCA. Dogs in their care showed a lower stress response to soft rock and reggae over pop, classical and Motown.

Although there has been less research on the effects of music outside of a shelter environment, I know many dog owners leave music or the radio on when they go out. If you’d like to try playing some music for your pooch, it’s now easier than ever. Major streaming services like Spotify and Amazon Music offer customized playlists for dogs, as well as access to old favorites “Through a Dog’s Ear,” “Canine Lullabies” and many more.

There’s no harm in experimenting if you aren’t sure what kind of music your dog likes best! Keep an eye on their body language and go with what seems to bring them the most Zen.

This blog post originally appeared as a column in the Pasadena Star-News on July 21, 2022. 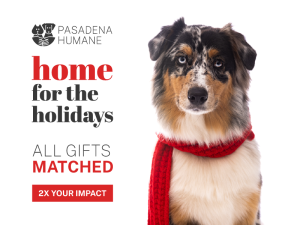