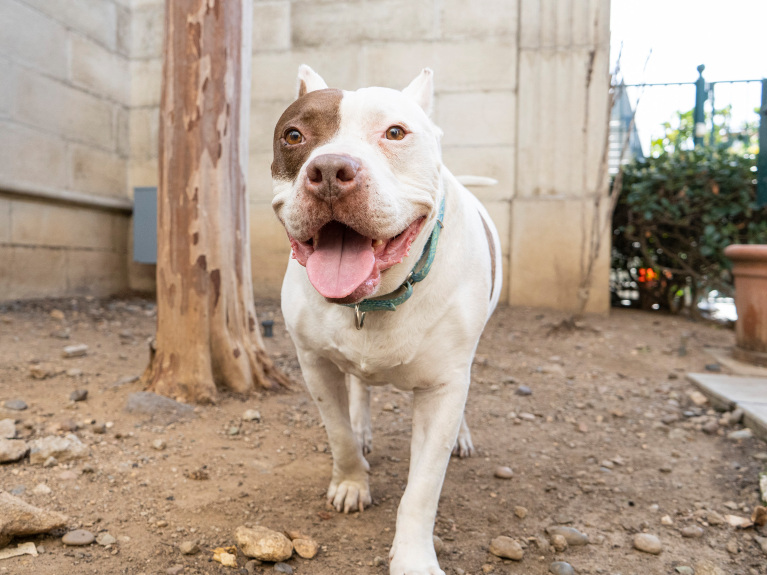 Four-year-old Brownie is a calm, easygoing dog who wants nothing more than to be loved and pet. His mellow demeanor will add a relaxing presence to your life, and his adorable brown cow spots will make you smile.

Have you ever met someone who captivated you from the first moment you met? You walk into a room and they say something deliciously witty and it’s as if you were just born to be friends. This doesn’t happen that often to me, but when it does, it’s like glitter and fireworks going off as I imagine all the fun bottomless mimosa brunches we’ll have together, and the selfies we’ll take with the hashtag #squadgoals.

It’s a rare, elusive thing – but there really is nothing quite like the moment you meet someone and promptly decide that you must be friends.

I had that moment recently.

I met Brownie (A404692), a 4-year-old Staffordshire Terrier mix about a month ago. One of our volunteer dog walkers, Tom was coming back from a walk with him – and as I was passing by, Brownie saw me and promptly stopped in his tracks and looked up at me. He’s a wide brute of a dog – so his considerable girth made it so that I couldn’t pass on either side, and he knew it.

It was as if he took one look at me and thought, “The price of passage is a belly rub. Pay up bub!”

We just stood there and stared at each other for a moment. I was standing there thinking, “I wonder if I can fit you in my pocket and carry you around everywhere because you’re the squishiest ball of love to have ever squished, and I can’t wait to be your friend.”

He stared back at me, likely appraising my excitement and figuring out how he’d use it to his advantage. He was an opportunist if I ever saw one. I like that in a dog.

After sizing me up and deciding I was an easy target to solicit belly rubs, he waddled over and leaned his considerable heft against me, a silent order to shower him with love.

I briefly thought about playing hard to get, but let’s face it, that would be so off-brand for me. Instead I just turned into a big codependent blubbering mess while I showered him with pets and baby talk.

Don’t give me that judgy look! You would have done the same thing if he was parked right in front of you like a lovable monster truck. I was defenseless against his charms.

To be fair, I meet a LOT of dogs every week, and so far I haven’t met one that I haven’t absolutely loved and fallen to pieces at the chance to dote on them. So while yes, I’m an equal opportunity dog lover, everyone once in a while one comes along that I just want to be friends with because their cool factor is off the charts.

Brownie is a cool dog. And let me tell you why.

This might sound strange, but Brownie is a lot like a cow. I love cows. Like, really love them. I love everything about them. They are beautiful, gentle, endearing animals who prefer to spend their time lazily grazing out on the pasture – and nothing really gets to them. They have this carefree swagger and are never in a hurry to get anywhere.

Brownie is basically the same way. He’s not in a hurry to do anything unless it involves eating or being adored. I can relate.

Our behavior team calls him “the Buffer.” During playgroup, often times we’ll work with high energy dogs who need some help learning manners with other dogs. So if we have two energetic dogs getting up in each other’s business during playgroup, we’ll simply walk our zen master spotted cow, Brownie, over and have him stand in between them as a buffer since nothing really rattles him. He’s just a quiet moose of a dog who doesn’t seem to be bothered by the spastic wiggles of our more active dogs – and his influence seems to have a calming effect.

He appears to have the same calming effect on our volunteers who have taken him out to mobile pet adoptions out in the community. Every weekend, our 35 ft Wiggle Waggle Wagon goes out on the road with adoptable pets to various community events, and Brownie has become a volunteer favorite on these outings because of his easy going nature.

This is Brownie’s second time staying with us at Pasadena Humane Society. He was adopted a few years ago by an owner who loved him dearly, but because of a very busy work schedule, Brownie ended up spending most of his time alone. Since Brownie suffers from seizures, his owner felt he would be safer in a home where he didn’t have to be left alone so much.

His seizures are pretty well managed with medication – so with that under control, he’s just looking for a family who can appreciate his sweet nature and reward it often with belly rubs. If you’re looking for a little more zen in your life, Brownie is just the sacred cow for you. Come hang out with him. I guarantee, after five minutes, you’ll be hooked. He’s just that cool.