Bagira is extremely playful with animals his size. The dog he grew up with was smaller than he is and they played all day chasing and wrestling. Bagira is very friendly. When the doorbell rings Bagira runs to the door to greet strangers. He will greet you in the morning and ask you to have breakfast with him. He’s very meticulous with keeping himself and his litter box clean. He’s used to spending long hours without a human, although he’s more used to having a pet companion. He’s social and likes to go outside. I often would find him in a neighbor’s apartment with other cats, just casually hanging out as if they were in the 1970’s film Aristocats. He enjoys cuddles in the bed and on the couch. I’ve trained him not to jump on kitchen counter surfaces and not to come into the kitchen while I’m cooking but he likes to stand in the doorway and watch me from there.

In honor of Giving Tuesday, your gift today will m

Foster kittens Yogi and BooBoo hope you're having

Mama, Wilbur, and Muzzy are just a few of the ador 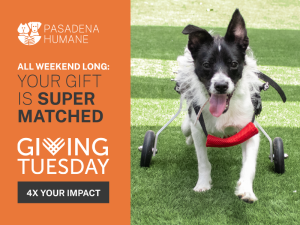