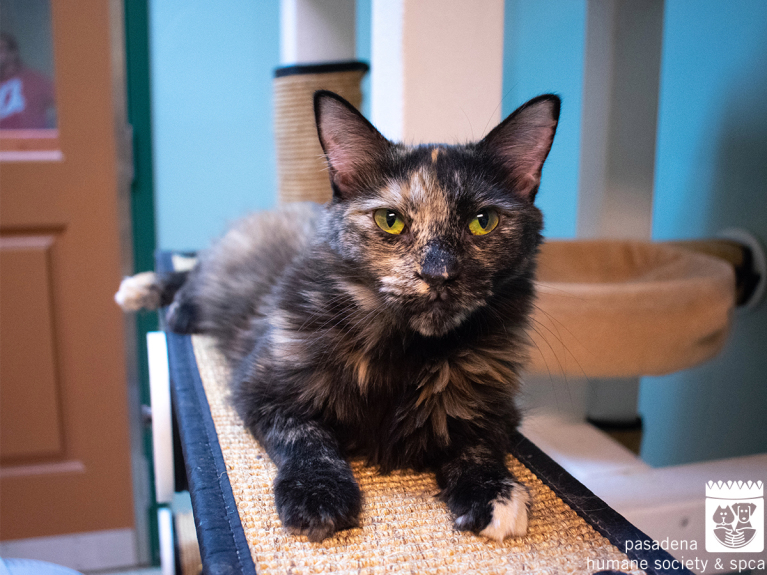 Her majesty, the Queen Mimi (No. A474542) is looking for a new kingdom to rule. Faithful subjects should come fill out an adoption application at Pasadena Humane Society.

Friends, I have good news, and I have bad news.

I’ll give you the good news first because the bad news is really bad – and you’ll probably want to brace yourself.

Maybe you should sit down. Yes, please sit. Perhaps with a cup of tea. Earl Grey sounds nice. Or maybe some chamomile? You’ll want something calming.

Everyone comfy? OK, on to the good news.

My dear friend and faithful cognitive therapist, Alice the cat, after so many months at the shelter, finally got adopted! As it turns out, her long term strategy to find love by being completely aloof and judgmental of every person to cross her path finally worked out!

She found a wonderful new companion who just couldn’t wait to get her home where she could sit high on a quilted perch looking down on the commoners, saying things with her eyes, like, “Who told you you could pull off the color turquoise? You look like a bloated peacock.” or “I thought we talked about the baby talking. I’m not your ‘swishy-ishy-wovable-wittle-gum-dwop.’ Seriously, just stop.”

Her new furever companion will be getting a lifetime of this invaluable insight. They’re so lucky. To say I’m green with envy would hardly cover the level of searing-hot jealousy I feel for them. But because Alice made it clear on three separate occasions that the color green makes me look like a sea-sick gutter monkey (her words, not mine), I won’t say that.

So here is the bad news: I have now found myself woefully, abruptly, painfully without a feline therapist. That gorgeous wellspring of sage advice. Her telling and judgmental side-eye. That knowing purr. What in Betty White’s name am I supposed to do now?

I am utterly lost without her.

I feel as though I’m spiraling down a neurotic rabbit hole of self-indulgent doubt that could easily result in total arrested development. By next week, I could be sucking my thumb in the fetal position under my desk, for all I know.

Lost, bewildered and dangerously close to a melodramatic meltdown not seen since Britney’s famed head shaving incident of 2007, I was just about to drown my sorrows in a quart of rocky road when the solution came to me: I just need to find a new feline therapist!

Thanks to a very busy kitten season, we are packed to the gills with cats at the shelter right now — with dozens and dozens of beautiful cats in need of loving homes. One of them is sure to be a great confidante, listener and trained therapist!

Hopeful and desperate, I began interviewing potential therapists yesterday. So far, it’s a little harder than I expected. My first couple of interviews didn’t go so well.

Gracie (No. A473906) is singing the title track from her album, “Purrrrrfection.” She’s available for adoption at the Pasadena Humane Society.

First,I was referred by a friend to Gracie (No. A473906), a gorgeous 9-year-old gray, domestic shorthaired cat. She’s been at the shelter since March, and all signs seemed to point to her being the ideal replacement for Alice.

She’s sweet, social and doesn’t shy away from a good ear massage. I was immediately drawn to her bubbly sense of humor. I like a therapist who can throw in a witty quip when doling out insightful cognitive analysis.

To be honest though, she’s a bit too self-absorbed for my taste. She’s living in one of our cat communal rooms where she can socialize and play with other equally social cats while she awaits a new home. She’s got that “cool girl” vibe going on, indicative of a cat who has no problem being the center of attention and telling funny stories at dinner parties.

When I walked in, she jumped down from the top of the cat tree to greet me. She ran right up and began rubbing up against my legs, as if to say, “I’m Gracie. But you probably already knew that. People know me here. I’m pretty gorgeous. It’s no big deal. You seem like an interesting guy, so let’s talk about me.”

I got the sense that she was more interested in her own social climbing than listening to my imaginary problems. So I moved on.

Next up was Mimi (No. A474542), a tortie domestic, medium-hair cat who walks through the world as if she was born with a crown on her head. Mimi is a true queen. She meows with confidence. She demands the respect of her devoted subjects and has the eire of a cat utterly confused by the fact that she isn’t being pampered by servants in a palace.

When I approached, I got the feeling I should curtsey. So I did. The other people in the room seemed a bit weirded out by that, but she was pleasantly impressed by my show of deference and allowed me to give her pets.

We had a lovely time together. She was very graceful, kind and didn’t make a show of her appreciation for the under-the-chin scratch. Chances are we’ll end up being really good friends, and at the very least she’d be honest with me about my fashion choices. She is quite regal, afterall, so I know I could trust her taste.

In the end though, I wasn’t sure I could really be comfortable sharing my stupid little problems with her. This is a cat who should be negotiating diplomatic sanctions and hobb-knobing with the Persian Queen from those Fancy Feast commercials. She’s just too highbrow — and I find it intimidating.

So the search continues. Finding a feline therapist is not an easy process. It takes time. It needs to feel right. In the meantime though, when my problems feel overwhelming and I don’t know the answer, I just think, “WWAD” or “What would Alice Do?”

Like, tonight for example. I was paralyzed with anxiety over whether I should maximize my 403B retirement contribution or finally buy one of those retro Airstream motorhomes that look like giant aluminum eggs. I never go camping and I can barely back out of my own driveway without hitting a mailbox, but still, it seems like a great investment.

Then I think, “WWAD?” In my mind’s eye, I can see Alice, upon hearing this dilemma, knocking over a vase and walking out of the room as if to say, “Your stupidity literally makes me want to throw myself in front of a moving Airstream.”

By the way, Gracie and Mimi are still available for adoption, and while neither of them ultimately made a good feline therapist match for me, they are two of the most awesome cats around. You should come check them out!