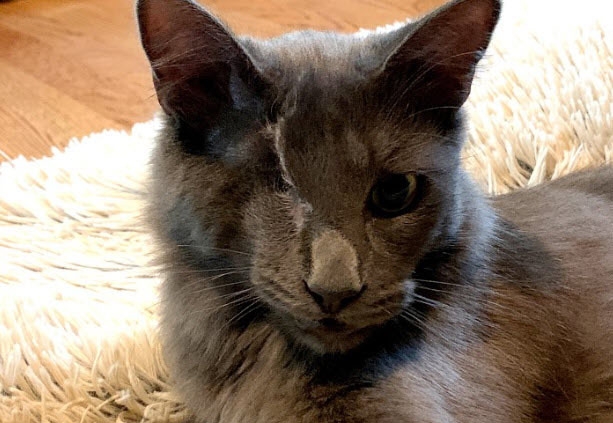 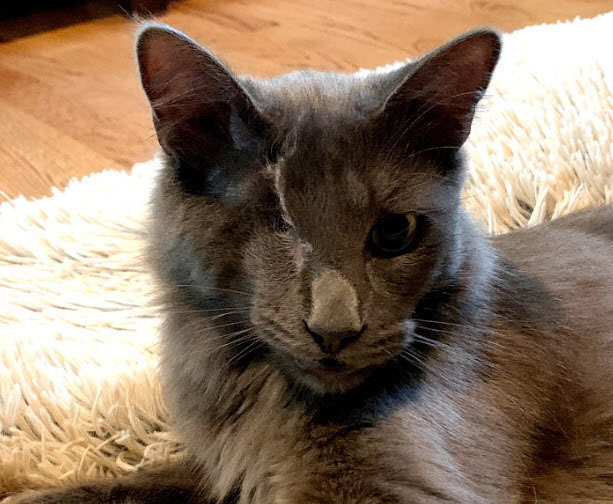 I love a story with a happy ending. Most of the happy endings we see at the shelter involve animals getting a second chance at finding a loving home where they are given the time and space to trust again after having experienced some sort of previous trauma.

If you recall, at the beginning of the month I wrote an update about a couple of cats that were adopted after being rescued from a pretty horrific hoarding situation. The beginning of their lives were not ideal. In fact, they were pretty bad. But now they are living their best lives with people who adore them.

That story sparked one reader to write in and tell me about his family’s experience having adopted a kitten from us last May. After telling me a little about the situation, I remembered when that kitten was brought in.

At the end of April, 2019, a kitten came to Pasadena Humane having been pretty badly injured from an attack from another animal. His injuries were mostly to his head, with the worst of it being a very swollen and bloody eye.

We concluded pretty quickly that the eye injury was so severe and infected, his best chance for survival was to have an enucleation, which is a procedure to remove the eye while leaving the eye muscles and remaining orbital contents intact.

Our vets were able to see to his other injuries as well – so within a few days, we felt comfortable placing him for adoption.

That’s when the Riboli family stepped in. After learning about this poor kitten’s case, they let us know they were interested in adopting. We were thrilled to learn of their interest because they had adopted all of their pets (and fostered) from us over the years – so we already knew them to be wonderful, responsible pet companions.

When the Riboli’s met the kitten, he was still looking pretty haggard from his surgery and was a bit wobbly and sedated. He was a mess. But they saw right through that and imagined the healthy and energetic cat he could grow up to be.

When they took him home, it took a minute to really settle in and adjust to his new surroundings. But the Ribolis were patient and experienced pet owners – so they expected it may be awhile before he pepped up and let his true personality show through. In fact, given his injuries, they expected it to take quite a while for him to mend and come out of his shell.

In the meantime, they named him “One-eyed Willy” after a character in the 1980s movie classic, “The Goonies,” (#bestnameever).

As it turned out, Willy didn’t need much time to adjust and mend. Within just a couple of days, he was bouncing around the house like a ping pong ball on Red Bull.

Quite literally overnight, Willy went from passively docile and doped up on pain medication to a furry one-eyed lunatic with the energy of a college finals study group on Adderall. It was fabulous!

As great as it was to see Willy comfortable and playful, it was obvious that he had not yet learned good boundaries and manners. Fortunately though, the Ribolis had a couple of other adult cats that stepped in and taught the little hellcat how to be civilized.

Now Willy is a healthy adult that has become the perfect addition to the Riboli family. He’s bright, friendly, and completely comfortable with people and other pets. Besides the scar that he wears as a reminder of his traumatic beginnings, he’s one happy little one-eyed purring machine.

Anthony and Shannon have been adopting pets from us for many years now – and have gotten to know me and our staff pretty well. When I first met Anthony a couple of years ago, he offhandedly remarked that he was a winemaker, and I just figured he was making it in his garage as a hobby or something.

Oh, but no. He’s definitely not making his wine in his garage. If you’re a wine lover, you’ve probably already heard of the Riboli Family. Anthony is a fourth generation winemaker for his family owned business, San Antonio Winery.

San Antonio Winery remains the oldest and largest producing winery in Los Angeles with over 100 years of winemaking, making it an essential component of the city’s cultural and historical landscape.

At Pasadena Humane though, the Ribolis have just been a really cool family who loves animals as much as we do – and have provided a loving home for several homeless pets over the years.

In fact, Anthony couldn’t make wine in his garage even if he wanted to since it’s been converted to a bunny habitat for the three bunnies they’ve adopted from us.

Their newest bunny family member, Clover, was a foster failure. Back in March when the stay-at-home order started, we were scrambling to find foster homes for all the pets in our care. The Riboli’s stepped up to offer help – and they fostered Clover, a sweet and dashing fellow who suddenly found himself homeless.

According to Anthony, he knew as they got their foster bunny home it would not be coming back. He just fit into the family too much to give him up.

After speaking with him this morning, I have a bunch more stories to tell you about them and their colorful menagerie of Pasadena Humane alums. So stay tuned for the tale of Sadie the cat coming up soon!

Thank you again, Riboli Family, for being such a fabulous example of caring and responsible pet ownership. Your commitment to saving and loving some of the most difficult adoption cases is an inspiration to all of us at Pasadena Humane!

A treat for your inbox.