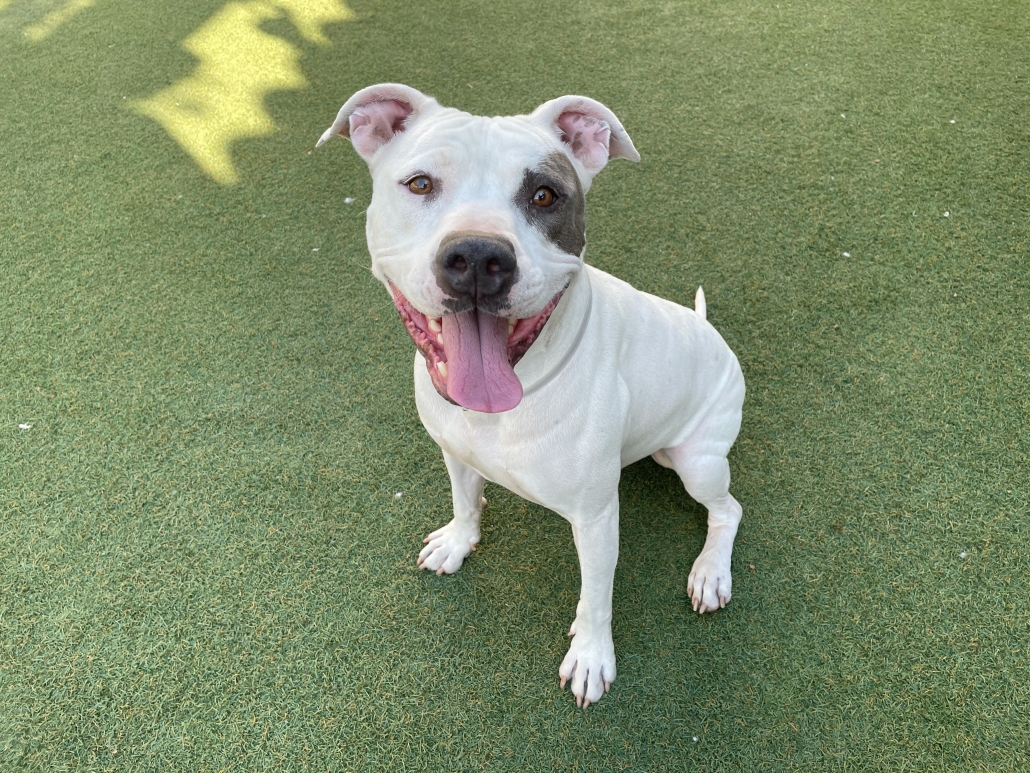 Crunch (A476765) loves to play with toys and is such a happy boy! An ideal home for Crunch would be with a dog savvy owner willing to put time into Crunch’s happiness. He’s available for adoption now!

My partner Andrew does a lot of things better than I do. He’s more organized, for example. He’s a man who loves a good “to do” list. So while I’m being a lump on the couch watching Golden Girls reruns, he can often be seen bouncing around the house humming to himself while he ticks off his to-do’s like a seasoned project manager with OCD on an Adderall binge. If it wasn’t so adorable, I’d be annoyed by it.

There. I said it.

He has a gentle way about him that animals respond really well to, and it’s fascinating to watch.

He is never in a rush around animals, and he also never dotes on them with the same kind of enthusiasm as I do. When I see a cute dog, cat or critter, my knee-jerk reaction is to get all bouncy and excited like a little boy who’s about to go on Space Mountain for the first time. I have to consciously check myself to be calm and relaxed to make sure I’m not inadvertently appearing more intimidating or erratic.

Andrew is naturally more laid back, and lets animals approach him at their own pace. Therefore, animals tend to trust him more quickly because his movements and posture put them at ease.

But the thing that really stands out about him with animals is that he talks to them. A LOT.

It is not uncommon to walk in the room to find him lying on the ground next to Maddie or Ollie chatting animatedly like two girlfriends at a bottomless mimosa brunch.

He’ll even narrate his actions with colorful descriptions like he’s recording an audiobook called “Let’s go for a walk!” It will go something like this:

“Do you want to go outside?” Is that what my pretty girl wants to do? Yes you are a pretty girl! Ok, let’s do that! I’m putting your harness on now. Is that too tight? Does that feel good? Look how pretty you look in your harness! Ok, lets go, lets go!”

He’ll keep chatting it up with them throughout their walk. And they love every minute of it. Even Ollie seems to enjoy their meandering chats, which is interesting considering he’s deaf and blind. Though I suspect for him, he’s more concerned with the belly rubs that come along with the one-way conversation.

So it got me wondering, does this puppy chatter do anything for the dog? I mean, we do the same thing with infants as a way of increasing our bond, so does the same effect work with dogs?

As it turns out, yes it does! Here’s what I learned.

Researchers Alex Benjamin and Katie Slocombe, at the University of York in the United Kingdom, set out to investigate if so-called dog-speak improves bonding between pets and humans, and specifically, whether it is useful for the dogs.

Slocombe explains the motivation behind the research, saying, “A special speech register, known as infant-directed speech, is thought to aid language acquisition and improve the way a human baby bonds with an adult.”

“This form of speech,” she adds, “is known to share some similarities with the way in which humans talk to their pet dogs, known as dog-directed speech.”

“This high-pitched rhythmic speech is common in human interactions with dogs in Western cultures, but there isn’t a great deal known about whether it benefits a dog in the same way that it does a baby.”

“We wanted to look at this question and see whether social bonding between animals and humans was influenced by the type and content of the communication,” Slocombe says.

Their findings were published in the journal Animal Cognition.

The latter was tailored for dogs both in terms of content (that is, the dogs were told things such as “You’re a good dog” and “Shall we go for a walk?”) and in prosody (that is, in stress patterns and intonation).

By contrast, adult-directed speech contained sentences such as “I went to the cinema last night,” which were spoken in a “normal” tone of voice.

The dogs’ attention spans were measured during the two speech types, and after hearing them, the dogs were invited to choose which speaker they wanted to interact with.

This first experiment revealed that the dogs strongly preferred humans who had addressed them using dog-directed speech. However, there was the possibility that it was simply the emotional tone that appealed to the dogs and that the content didn’t have anything to do with their preference.

So, in the second experiment, “the content from experiment one was reproduced but with reversed prosody such that the dog-related content was spoken with the prosody of [adult-directed speech] and vice versa.”

When they mixed-up the two types of speech and content, the dogs showed no preference for one speaker over the other.

So when Andrew is telling our dogs about his day or narrating a dog walk, they really aren’t all that concerned with the content, but they certainly seem to enjoy the ritual and attention they’re getting in the process.

If you think about it, this is an important lesson in communication. Whether you’re talking to your dog or another human being, your tone matters. When your tone reflects quiet confidence and kindness, your words will be met with greater ease and understanding. And you’ll probably get some tail wagging and a lick to the face too!