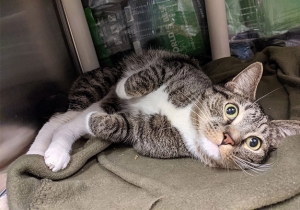 Jack was adopted out from Pasadena Humane a couple of years ago, but his owner was no longer able to care for him. So, Jack is back. An ideal home for him would be one that is calm and quiet and willing to give him the space he needs to adjust once again to his surroundings.

If you follow me on social media (@jackhagerman), you’ll really only see one thing: fun animal memes and videos. I suppose I could use social media to push out my opinions on politics, post pictures of food I’m about to eat, or share edited selfies that make me look way thinner and younger than I actually am. But I’m not about that life.

I prefer to put content out in the world that makes people smile — and if a video of a cat snuggling with a baby racoon doesn’t make you smile, then you clearly have a pickled black heart and can’t be trusted.

Since I like to post these types of photos and videos, I follow a LOT of popular pet-focused social media sites like The Dodo. So most of what shows up on my feed is fun, uplifting content with animals playing, cuddling, or doing hilarious things they probably shouldn’t be doing but can get away with because they’re so cute.

Lately, I’ve been watching a lot of cute cat videos, and it’s made me really miss my late cat, Bailey. For nearly 20 years, the old man brought joy to my life with all his annoying and comedic quirks.

If you have a cat, you probably observe some peculiar habits. Much of their behavior stems from natural instincts though, and have a purpose. Here are eight examples of strange cat behavior, with an explanation each.

Cats are inherently nocturnal. The ancestor of all domesticated cats, the African wildcat, is mostly active once the sun sets. Even an adult cat that sleeps through the night with you will wake a few times to play, eat and walk around.

Pro tip: Feed them just before your bedtime, because most cats become very sleepy after a big meal.

Cats keep themselves as clean as possible. They despise a dirty litter box and will avoid eliminating in one. I get it. I certainly wouldn’t want to use a toilet that had not been flushed.

The ASPCA recommends you have one litter box per cat and one extra; two cats should have three litter boxes. Scoop out the litter at least once a day, and clean the entire box with warm water and replace the litter once a week.

Cats tend to like a litter box in a quiet, open location with more than one potential exit.

Meowing is one way that cats communicate with people; in fact, adult cats don’t meow at each other.

Certain breeds, notably Siamese, are known to vocalize more than others.

Cats meow to say hello to us, get attention, to get food or water and go in or out. When you meet their needs in response to their meow, they learn that it inspires action in their owner, so the behavior continues.

Increases in meowing also occur when they experience changes in the household, such as new companion animals, a move or when cats change from outdoor to indoor cats.

If your cat meows excessively though, it could be a sign of an underlying medical problem. So take your cat to a veterinarian for a diagnosis.

If they’re seeking attention, consistently ignore your cat’s vocalization, refusing to respond to any requests for attention until the cat quiets. Once the cat sees that meowing won’t result in attention to their needs, it will stop.

When your cat was a kitten, it stimulated its mother’s milk flow by kneading the area around the teat while suckling. Kneading helps the flow of milk to the mother cat’s teat, so the kitten can consume more milk.

Adults cats still knead their claws. It’s a sign that they are comfortable and happy, although it’s not known why this behavior persists into adulthood.

When cats butt or bump their heads against you, it’s a display of love and possession, which lets other cats know you are taken. They have glands in their heads that secrete pheromones, a chemical secretion. So a head butt is basically your cat saying, “I like you. You’re mine now.”

They have scent glands in their heads and along their bodies. When they rub these areas on you, furniture or any other objects, they’re marking their territory and signaling to other animals that those items belong to him. Cats will do this whether or not other animals live in the house.

Biting is another way that cats communicate with people. If a cats bite you while you’re petting them, they’re probably irritated by being stroked. So, you know, stop it.

Also, be aware that some cats just prefer other ways to interact with their owners. If that’s your cat, play with him more and pet less.

Cats in the wild don’t have nail clippers. They sharpen dull claws by scratching trees. They also scratch to mark their territory and while they stretch.

It’s impossible to stifle a cat’s need to scratch, but you can refocus their energy. If your cats have enough appropriate places to scratch, they won’t use your furniture, carpet or drapes.

Dozens of scratching posts are sold on the market in a variety of materials, such as carpeting, wood, cardboard and rope. They don’t have to be expensive. Some are vertical; others lay horizontally on the ground.

Every cat has preference, so experiment with a few types until you learn which is your cat’s favorite scratching post. Then stockpile these all over the house.

Sneak Attacks on Your Feet

Cats that attack your feet as you walk by are probably bored and looking for stimulation. They may not have enough toys to play with or may want new ones. They might also benefit from having a feline companion to play with. For short-term relief, notice where your cat enjoys pouncing on you.

If, for example, they like to hide behind a door, have a couple of cat toys in your hand when you approach. As you reach the pounce area, toss a few toys in front of you. The cat will run after the toys and you can pass by unscathed.

These are just a few of the ways cats reconcile their instinct in a human household. By spending time bonding with your cats, you’ll be able to pick up how they communicate needs and feelings to you.

Do me a favor, though. When you see your cat doing the darndest things, please record it with your phone and post it online so I can reshare it. It takes a village to enable my social media habits!