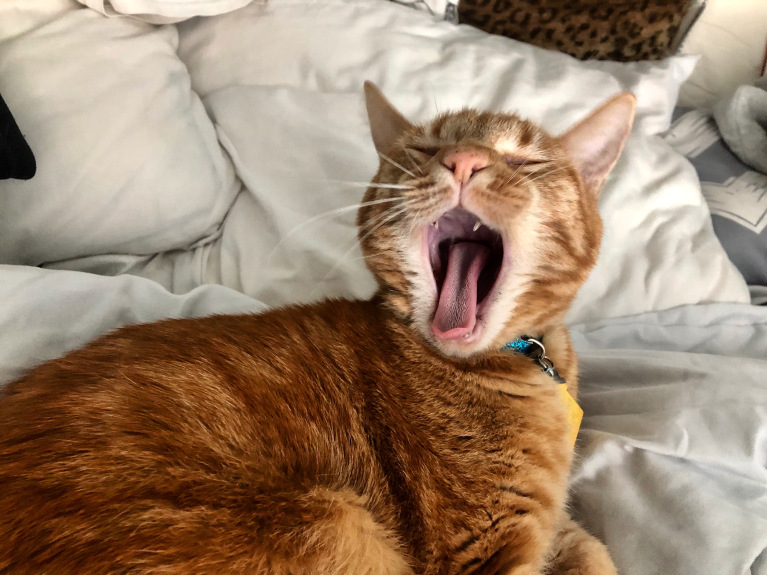 I have always been a “glass half full” kind of guy. I’m not quite sure where it came from or when it started, but I have always had this natural ability to find and truly appreciate the good that can come out of any circumstance.

My optimism and gift for spin has served me well throughout my life. But during this time though, it has become a mechanism for survival.

It’s what helps me to cope with all that is happening in the world right now. It helps me get up in the morning. It keeps me moving forward. And let’s face it, it keeps me from picking up a drinking problem or opioid addiction.

I’ll be honest. It’s not always easy to find the good when bad things happen. Sometimes things have to be bad for a really long time before something beautiful can emerge. This moment in our history has felt like one of those times.

When I need to find peace within myself, I like to jump in my “way back” machine to recall specific times when it felt like everything was crumbling around me. When I think about those moments, I remember the pain … the impatience … the hopelessness.

I only stay there for a brief moment, just long enough to be reminded that I healed. We always heal. It takes time, but we do.

This morning, one example came to mind that I’d like to share with you now. It’s been a while, but you may remember the story that made headlines across Los Angeles in January 2018 about 54 cats being rescued from a single residence.

Animal control was dispatched to the house after a concerned neighbor called into our tip line. Once inside, they discovered there were dozens of cats living in total squalor. There were feces and urine everywhere and the scent of ammonia so strong, it could knock a person over.

Our officers got to work locating and capturing cats trapped inside while staff back at the shelter prepared for their arrival. Upon closer inspection, it was obvious they were traumatized. Living in squalor with no human contact, they were scared, unsocialized and suffering from a variety of illnesses and injuries.

It was one of the worst hoarding cases Pasadena Humane had ever seen.

It was a deeply painful experience for our team — one that none of us will ever be able to forget.

But there was also an overwhelming sense of relief that this was the first day of a new life for these cats.

From that day forward, they would only know a world where they are provided for, given clean space, and cared for as part of a family. It was the beginning of a new, fabulous life; so we nicknamed them the “Fab 54.”

Given how unsocialized and “feral” these cats appeared to be when we rescued them, it was a bold decision to try and find homes for all of them. They were going to need a very special kind of adopter.

Nothing about it was going to be fun or easy. But it would be worth it.

My very clever marketing team thought it would be fun to ask our supporters to tell us about why they love their pets. We put a plea out in social media and email, and we received dozens of great stories from people who adopted pets at Pasadena Humane with some very touching letters about why they love them so much, and what joy they’ve brought to their lives.

Among them were a few responses from people who adopted one of the “Fab 54.” I’d like to share a couple of them with you here. 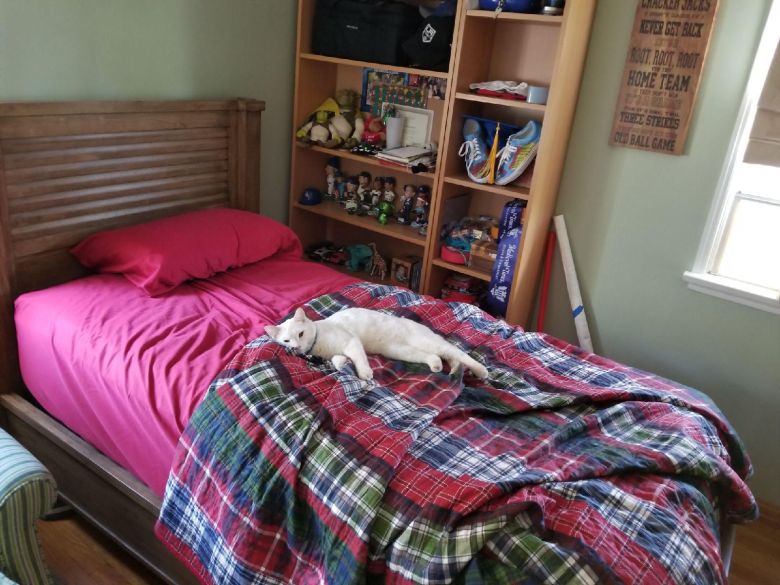 Rupert is one of 54 hoarded cats rescued in January 2018 from a home in Pasadena. His new owner reports he is an amazing, smart and loving cat.

“I adopted Rupert from Pasadena Humane two years ago. He was one of 54 cats that had been rescued from a hoarding situation. While Rupert had very little human interaction before being rescued, he is a brave cat and took a chance on me.

“Two years later he is an amazing, smart and loving cat who loves napping under my lavender bush during the day and snuggling and watching television with me in the evening. I really appreciate that Rupert worked very hard to trust me and my family, including my rescue dog Raisin. Rupert has even gone on walks with me and Raisin!” 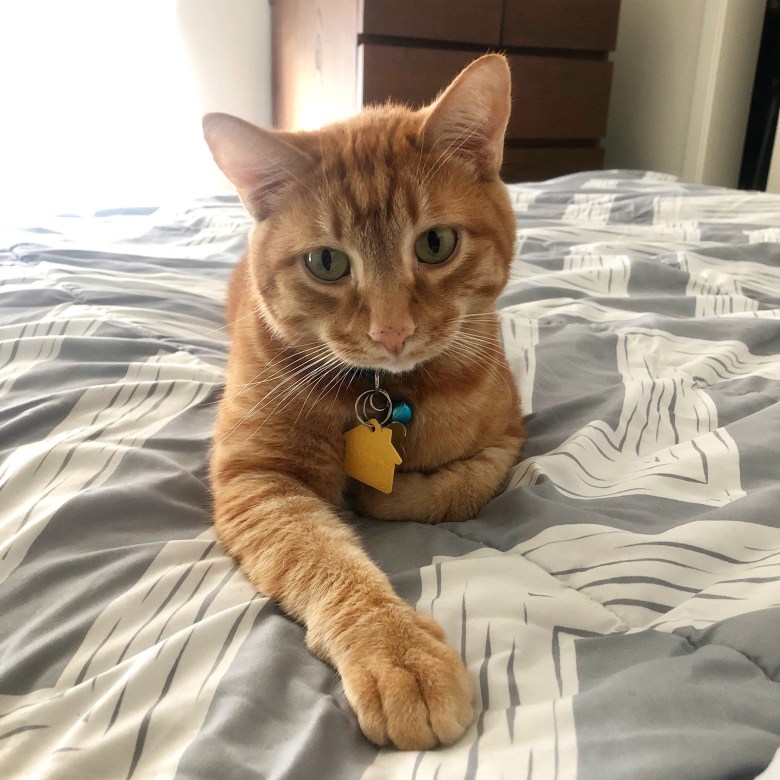 Oscar was one of 54 hoarded cats recovered from a home in Pasadena in January 2018. His owner reports that he went from being unable to stand being in the same room as a human being to playing, sleeping in bed with her, and meowing just for fun.

Claudia told us about her experience adopting Oscar:

“Many of the volunteers at the shelter told me that the chances of him ever being a ‘normal cat’ were slim to zero. But over the course of the first 6-8 months of having him, I saw him transform.

“He went from being unable to stand being in the same room as a human being to playing, sleeping in my bed with me, and meowing just for fun. It took a lot of effort, patience and love, but now Oscar loves exploring, napping, spending time with everyone he meets, sunning on the balcony, and everything in between!

“Every time we visit the vet, he receives compliments as to his behavior and his ability to cooperate with the doctors and technicians. He’s even flown cross-country in an airplane with me to visit family several times! I love Oscar even more because he is adopted and because of the honor it has been to watch him grow and develop.”

I woke up needing a reminder that things will get better. Oscar and Rupert’s stories helped to heal me just a little bit because their example proves that we can always begin again. We can learn to overcome our fear. We can learn to trust one another again. We can choose kindness, and live most powerfully with love. In time, we will.