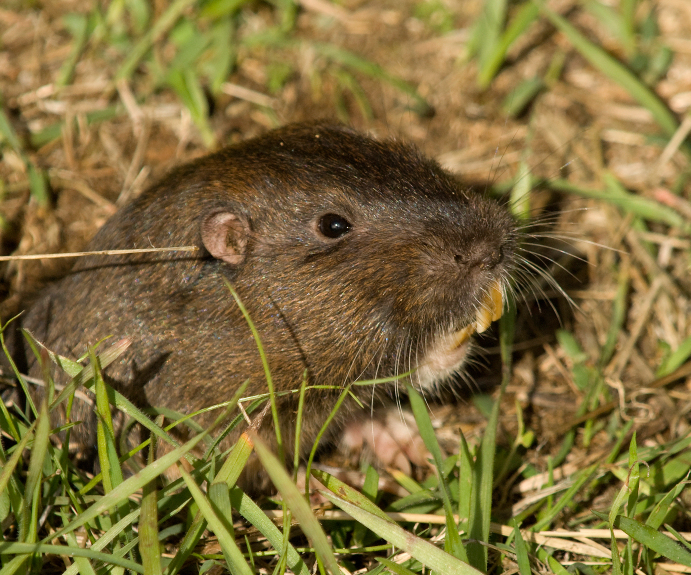 While it’s true gophers can be a nuisance, they aren’t often dangerous.

Not sure if you have Gophers? If you witness small mounds of dirt popping up in your yard, chances are you have them.

While it’s true Gophers can be a nuisance, they aren’t often dangerous. You will very rarely (if ever) see them because they prefer to spend most of their time underground in solitary. As someone who only just re-emerged from the dark hole of my bedroom after having the flu, I can identify with the desire to hide from the world – but these little guys aren’t hiding as much as they are just making a living.

We recently got a few calls from residents wondering what, if anything, they could do to deter them from their properties – so I figured it was a good time to talk about these adorable little subterranean gangsters.

These small, furry rodents are common in North America. Their full name is Pocket Gopher because they have external fur-lined cheek pouches, or pockets.

It is easy to tell where a gopher’s home is. They push dirt to the surface as they dig, which creates long mounds on the surface – which is one of the reasons most people are so annoyed by them. Nothing disrupts the clean lines of a pretty lawn more than random mounds of dirt everywhere – am I right?

Believe it or not though, these little guys are an important part of our local ecosystem. They increase soil fertility by mixing plant material and fecal wastes into the soil. Their burrowing aerates or tills the soil. They can help speed up the formation of new soil by bringing minerals to the surface and they also serve as food for a variety of other wildlife in the area.

Gophers are very territorial and solitary, so you’ll rarely get more than one critter per acre. But she can dig up 10 to 30 mounds of dirt in your yard every month – so while it might look like you have a giant colony, trust me, you don’t.

There are some creative ways that you can discourage gophers from making a home on your property – and it all starts with making your home unattractive to them in the first place.

For a humane removal method, consider sending the gophers packing on their own using repellent. First, plan an exit route you hope they follow out and away from your property. Then, place castor oil pellets, peppermint oil, or fabric softener sheets in the burrows nearest your house to start.

One or two days later, place additional repellent in burrows further out—and closer to your desired exit point at the far edge of your yard. This will push the gophers away from the source and out.

Gophers may also be turned off by pet waste or fish scraps placed in their tunnels, if you’d prefer to use waste you have on hand.

Can you just flood them out?

Uh, no. That’s a really bad idea for a couple of reasons.

Flooding gopher tunnels with water harms the lawn and doesn’t guarantee success. Water simply loosens the dirt, making your land easier to tunnel through. And gophers aren’t stupid. Until the water recedes, they can easily retreat to higher ground – so you’ve just overwatered your lawn for no good reason.

More ideas that aren’t worth the time effort: Fumigating (smoking gophers out with the exhaust from a lawn mower or blower) or blowing up the holes. Aside from being downright dangerous, these methods will cause more harm to your lawn than even the most active gopher. Often, gophers will seal themselves in a tunnel and wait out the fumes anyway.

After attempting one of the methods described above, check to see if the gophers have packed up and moved on by poking a hole into one of the burrows. If after a few days the hole stays open, your guests are gone!

Your work isn’t quite over, though: once they’ve left, make sure they’re gone for good with a few precautionary measures. Start by planting natural gopher-repellent plants such as natal plum, lavender, salvia, catmint, oleander, penstemons, rhaphiolepis, rosemary, and/or strawberries.

If you tend to a flower or vegetable garden, dig a trench around the plot and bury a wire mesh screen (hardware cloth) in it to prevent burrowing.

Finally, if extra concerned, place a solar- or battery-powered ultrasonic emitter in your yard to keep gophers and any other rodents at bay. Such a device, situated at ground level, creates vibrations small enough for humans to miss but big enough to annoy small pests.

This trifecta—repellent plants, a trench, and an emitter—can ensure your unwelcome guests don’t return, leaving your yard low-maintenance and critter-free!

Honestly though, the very best way to keep these little buggers off your property for the long term is to adopt a dog! Dogs are natural gopher repellents. And they bring with them a host of other benefits as well, like cuddles, companionship, and constant entertainment. It’s a win-win!