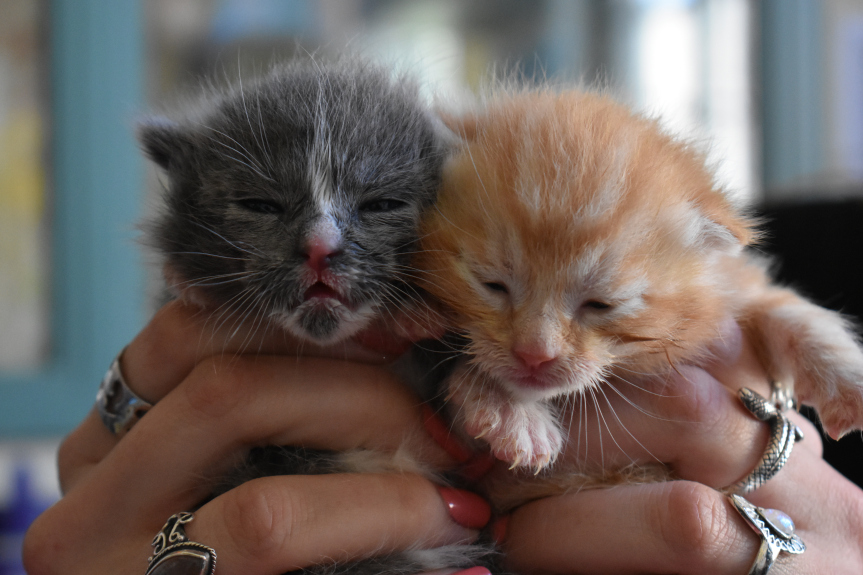 Pasadena Humane Society is still being inundated with kittens this season and need foster homes to care for them until they are old enough to be adopted.

My friends (and a whole lot of readers) seem to think they know me, so often send me news articles, funny videos, and memes all related to, you guessed it, animals. Apparently I’m not subtle about my interests.

Because I’m not shy about my love of cats, a couple of weeks ago six people forwarded me the same article published about recent research into cat behavior.

The headline, I assume, was intended to be a shocking revelation in a “as it turns out, the earth isn’t flat” kind of way.

My first thought was, “Fake news.” Because, of course they don’t. I can list about 27 things off the top of my head that clearly prove my cat, Bailey, couldn’t stand me — and I have nearly 21 years’ worth of anecdotal evidence to support it.

I decided to read it anyway. In this particular study, researchers concluded that cats are just as strongly bonded to us as dogs or infants.
They recruited owners of 79 kittens and 38 adult cats to participate in a “secure base test,” an experiment commonly used to measure bonds that dogs and primates form with caretakers. A similar test is also used for human infants. It is based on the theory that infants form an innate bond with caretakers which manifests as a strong desire to be near that person.

In the experiment, cat and kitten owners entered an unfamiliar room with their animals. After a couple of minutes, the owner left the room, leaving the cat or kitten alone — a potentially stressful (or delightful) experience for the animal. When the owner returned two minutes later, the researchers observed the feline’s response.

About two-thirds of cats and kittens came to greet their owners when they returned, and then went back to exploring the room, periodically returning to their owners. Translation: “All is right with the world; my person is back. Now I can go play.” These animals, the researchers concluded, were securely attached to their owners, meaning they viewed them as a safe base in an unfamiliar situation.

After the first round of tests, the researchers enrolled half the kittens used in the study in a training and socialization course. The other half served as a control group.

One day a week for six weeks, kittens played with one another and were trained to sit, stay and do tricks. When the course was complete, the researchers repeated the secure base test with the kittens.

They found the same results, meaning the training did not have an effect on kittens’ attachment behavior toward their owners. This indicates that once a cat forms a bond, it seems to remain stable over time.

So yes, this research proves is that cats are just as bonded to us as infants and dogs. But if you ask me, it doesn’t prove that they like us. In fact, I’m pretty sure we exist in their world as minions to manipulate and bat around like little balls of tinfoil for their amusement.

From the moment I brought Bailey home as a kitten, I knew I had brought a lion into the house. This was his kingdom, and everyone in it was only there to serve his every royal whim.

Basically I was his chief of staff and housekeeper.

I’m sure there were some moments over the course of his long life that he must have liked me. He was in fact, a very sweet, gentle soul. But I have to be honest, I could never really shake the feeling that everytime he was being sweet and loving, it was a well orchestrated and diabolical manipulation manufactured to lull me into a false sense of security that my life was not in danger.

At the time and in hindsight, I’m fairly certain this cat was very regularly plotting my murder.

Don’t look at me like that! I have proof!

Here’s an example. Every night for more than 20 years, in the middle of the night as I slept, my 23 pound house-lion would creep slowly up on top of me and insist on sleeping on top of my chest, purring like a Harley Davidson. Have you ever tried to breathe with a 23-pound weight on your chest? It ain’t easy. If that isn’t an attempt to murder by suffocation, I don’t know what is.

Behavior experts will try and convince you that when a cat kneads on you, it is a sign of love an affection. No, friends, that is a sign that your cat is checking for signs of weakness in your internal organs.

All those cute little things they do you assume are affectionate and awesome are really just covert surveys to assess weakness to plot the perfect moment to attack. I’m telling you. They’re cute, sweet, and hopelessly adorable little sociopaths who will sooner kill you as purr at you.

This is why I love them though. Their bond with us is very real. But I respect the fact that a secure bond doesn’t necessarily equate to co-dependence. Cats simply view us as part of their family — and while families certainly love each other, they don’t always particularly like one another. Somewhere along the line, humans started to assume that because most cats don’t act as if we are the center of their universe and can’t live without us meant that they must not be bonded with us.

The truth is, your cat probably thinks you’re pretty great most of the time – and their bond with you is for the long haul. Unless you annoy them.. This is where the murder-plotting comes in. Sleep with one eye open, is all I’m saying.

Speaking of the cute little affectionate things they do, have you ever watched a kitten learn about the world in the first weeks of life? It’s pretty darn precious and the perfect window into the making of a furry little sociopath. It’s not to be missed unless you prefer living a tediously inane and boring life.

So if you haven’t already, consider fostering some of these little criminals. We have so many baby kittens right now who need fosters to care for them until they are old enough to be adopted by willing cat servants. You’d be doing a good thing for a really good cause. Hit us up at foster@pasadenahumane.org for more information.

A treat for your inbox.