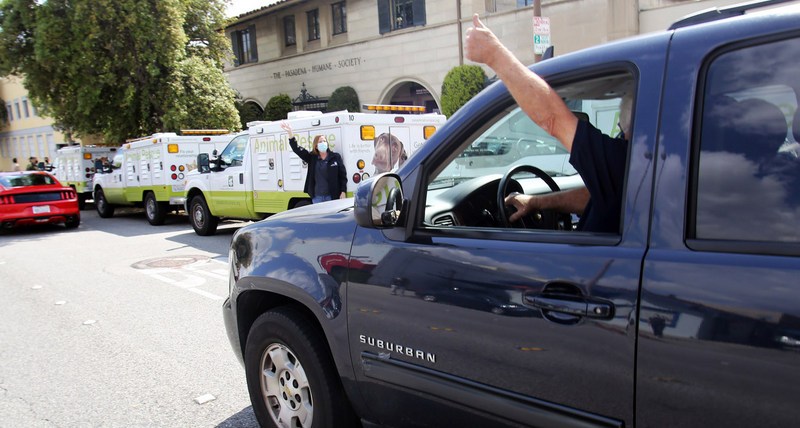 Friends and supporters of the Pasadena Humane Society show appreciation for animal control officers on Friday, April 17, 2020, in Pasadena, California.

I love an impromptu parade.

Last week was National Animal Control Officer Appreciation Week, which honors the hard-working men and women of Animal Care and Control who serve as first responders out in the field for all matters related to animals in our community.

We decided to celebrate by inviting our friends and supporters to drive by the shelter at exactly 3:05 p.m.Friday to honk their horns, scream and yell, and wave home-made signs at our animal control officers who were all lined up with their trucks in front of our shelter on Raymond Avenue as a “Thank you” for all of their hard work and service to our animal friends.

Because we had never attempted anything like this before, I was a little nervous about the turnout. What if no one showed up? Even worse, what if only like, three people showed up and used bad grammar in their handmade signs? How awkward would that be?

You never know unless you try though, right? So we sent out an email invite to our supporters and blasted it on social media the day before, and hoped for the best.

As it drew closer to 3 p.m. the day of, two broadcast media outlets showed up to capture footage of our allegedly fabulous animal control officer “Thank You” driveby. Then, some print media photographers showed up.

At about 2:52 p.m., I was really starting to sweat. Figuratively and literally. It was horrifying enough to think about only three people showing up with lame signs littered with misspellings — but now it was going to be on the news?

I wanted to stress eat nachos and ice cream.

The news crews started setting up their cameras while I paced back and forth silently praying that I could either find a rock to hide under indefinitely, or be hit over the head with one.

Then, as if sent from heaven, a car appeared on Raymond Avenue, having just turned right from Del Mar. And then another. And another….until in a matter of seconds, a line of cars formed that were slowly driving past wailing on their horns as people started screaming “Thank you!” out their windows.

People decorated their cars with streamers and handmade signs. And not a single one had a misspelling or punctuation error.

It meant a lot to us to have so much support from the community on that special day. Our animal control officers are out every day as first responders, ensuring the animals in our community get the immediate lifesaving support they need. What they do is important. Really important.

Although, most people have no idea what animal control officers actually do.

Historically, the officers were seen as little more than “dog catchers.” But the truth is, the field of animal welfare has changed dramatically in the last 20 years, so the role of an animal control officer has expanded beyond the “old school” approaches. Yes, they pick up strays, and in some cases DOAs, but there is so much more to it.

Animal control officers do humane investigations, seek justice for abuse, neglect and abandonment, and bring animals in need to safety. They write long reports, face abusers in court and deal with lost, injured, sick and aggressive animals. They protect people from dangerous animals and animals from dangerous people. They do bite quarantines and rabies prevention. They educate the public and teach people how to better care for their animals.

They’ve removed animals from the arms of their deceased owners, from fatal car accidents and from floods, fires and murder scenes. They’ve removed animals from homes and vehicles after their people were arrested and removed large aggressive guard dogs to enable law enforcement to search areas. They’ve picked up animals after suicides and animals that were left with human bodies and no food for long periods. Some of the things they’ve seen will haunt them for the rest of their lives, but they do it because the animals need them.

They’ve been called puppy killers and worse, by people who have no idea that they’ve dedicated their life to this profession because they genuinely care for the welfare of animals.

These brave men and women deserve more than just a parade of cars honking and hollering in their honor. They deserve our respect and gratitude for continuing to be out in the field every day making sure our community is safe for animals and the people who love them. #squadgoals

From the bottom of my heart, thank you for your service.